The Adventure Pals developed by Massive Monster and released on PC/Mac, Nintendo Switch, PlayStation 4, and Xbox One, is a colourful and vibrant action-adventure platforming game. You control a young boy named Wilton; whose birthday plans are interrupted by the evil Mr. B, who kidnaps your father. It is up to you, your giraffe sidekick named Sparkles and a friendly pet rock named Mr. Rock, to help bring an end to Mr. B’s evil plans – turning everyone into hot dogs!

The Adventure Pals consists of five worlds that are each made up of individual stages, challenges, a hub area and a shop. Each of these worlds are unique in their design and the inhabitants that live there. On the hunt for evil Mr. B you will find yourself traversing deserts, woodland and even an underwater city. The levels themselves are also broken down into sub-levels, which enables the player to feel a constant sense of progression: as on completion of each level when you reach the well at the end of the area, the game shows you that you are one step closer to your goal.

The battle system is simple enough and contains light RPG elements such as health and experience bars. At the start of the game, you have little more than the sword in your hands and the occasional bomb (when you happen to stumble upon one!). As you level up, you unlock numerous new perks/rewards that improve the battle system and the game in general substantially. You can unlock such things as Sparkles grappling you towards enemies, Mr. Rock both attacking enemies for you and finding items, recovering HP from enemies and perks that are just convenient such as coins and experience orbs being drawn to you as you approach them. 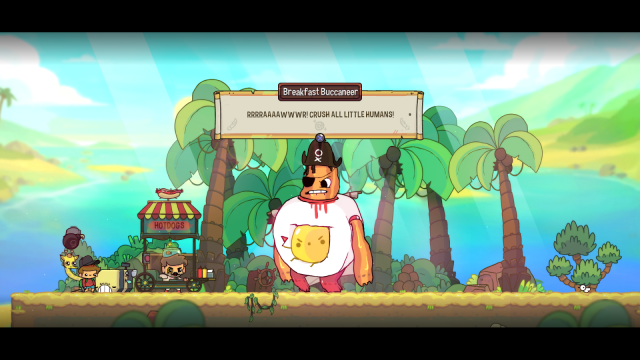 The Adventure Pals’ gameplay is comprised of platforming elements that have you looking for switches to allow for progression, or to temporarily remove spikes from an area. You’ll need to find homes for flying cats and missing pigs to be able to progress through the game. Luckily, you’ll have your magical pal Sparkles, who uses their tongue to propel you through the air and as you swim in the sea. The control system is easy to learn, with each a single button mapped to jump and glide and the other for attacking. This simple control system worked flawlessly and if I ever missed a jump or hit spikes and died, it was always due to a fault of my own.

The game also consists of a local two player co-op mode that allows you and a friend to play through the game together. The system uses a drop in/out process for the game – which means that at any time someone can pick up a second controller and join in on the fun. This is my much-preferred method of local co-op due to being able to continue the save regardless of the second player being present or not. During multiplayer you will find that all the adventure is on screen which means that if someone is lagging behind, they will automatically be teleported close to the person who has advanced further throughout the game, much in the same way as the LEGO games for example.

The boss battles are fun due to the surreal designs that they possess. For instance, one of the bosses that you fight, looks like a hot breakfast that has come to life! These battles consist of simple mechanics that have you avoiding enemy attack before hitting a certain part of the boss and repeating until death. 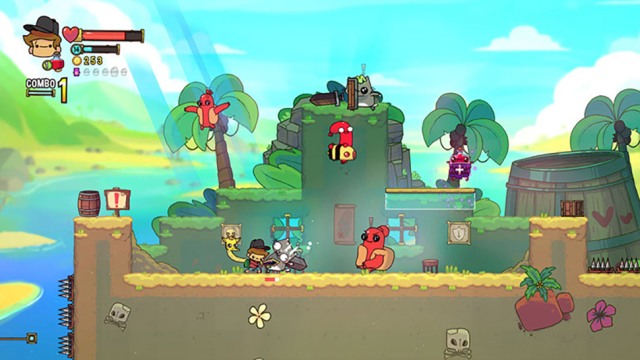 In terms of difficulty, the game is straightforward. The controls are easy to understand, and the game points you in the right direction on the map. If you happen to die during a level, you only have to restart the sub-level that you are currently on. There is a penalty for death, but one of the level up perks you can obtain early on allows you to pick up what you lost at the point of death which greatly alleviates any loss of progression. The game is also generous with its items. Healing potions are abundant and can be bought at all the shops, and the bombs do a great deal of damage – one or two bombs often takes out a whole group of enemies.

The game offers a lot in terms of replayability due to the number of collectables that it has. There are five cupcakes hidden in the levels – one in each sub-level. Once you have collected these you can trade them into a rather obscure looking cat who will eat them, before laying an egg that hatches into a collectable for you. It all sounds a little odd but that is a theme throughout The Adventure Pals and it’s better to just accept it and go along for the ride! Each level also contains a sticker for your sticker book. There are forty-four in all to collect through the levels, completing parts of the game and by buying them in the shop.

Unfortunately, I do have to mention two issues that I had during my time with the game. Firstly, I noticed that during certain parts of the game the framerate would drop significantly. This normally happened just before areas with an abundance of enemies in them, and this would lead to not being able to avoid enemy attacks and ultimately frustration. The rest of the time the game ran seamlessly. Secondly, I encountered a bug where I died at the same time as an enemy guarding a computer, and because of that I was not able to progress past that point. I redid the sub-level numerous times, beating the enemy and the self-destruct mechanism wouldn’t activate. This was easily rectified by exiting the whole level and starting again. The chance of the player dying at the same point as the enemy is probably rather rare, however I believe it is still worth noting that it happened to me. 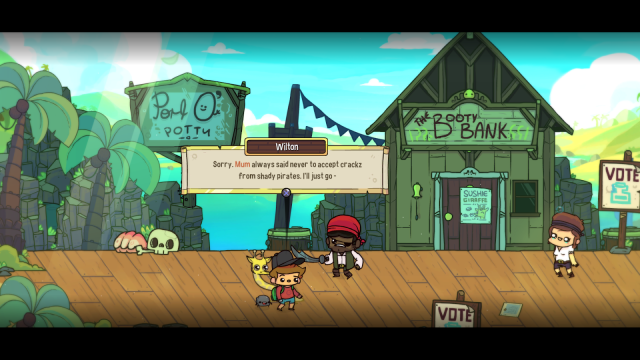 Whilst the story in The Adventure Pals is on the lighter side, it’s still full of humorous dialogue, clever puns and interesting twists to keep you engaged throughout your giraffe touting adventure! The story is told using dialogue boxes. I was tickled when a living piece of toast told me to not worry about the other toast next to him because he’s “French toast.” And of course, he had the French accent to go with it. The Adventure Pals is obviously made with children in mind, which is apparent through the story that it tells. However, it should be said that this doesn’t mean that it is inaccessible to adults. Older players will enjoy the game just as much if not all due to all the puns and more adult jokes that are littered throughout the game. An early example of this is when Wilton has a conversation with a group of foxes, and he discovers that they need ‘potions’ to get their vibe back and make good music.

Graphically, the games’ use of bright, vibrant colours works perfectly together with the insane themes of the game itself. All the characters and enemies are drawn in a very cartoony style reminiscent of cartoons such as Adventure Time. Every single time that Wilton jumps he leaves behind a trail of colourful confetti which was a nice addition. The game does have a few cutscenes throughout the game that are animated quite nicely. There is one towards the end where the twist of the game is revealed that is quite funny.

The audio throughout the game is made up of fun, happy-go-lucky tracks that suit a game such as this. One of the main audio aspects that I enjoyed is the fact that the music changes based on the environment. There are times where you will encounter certain people or places and the music changes from the default level music to a track specifically designed for the situation which was a welcome addition. 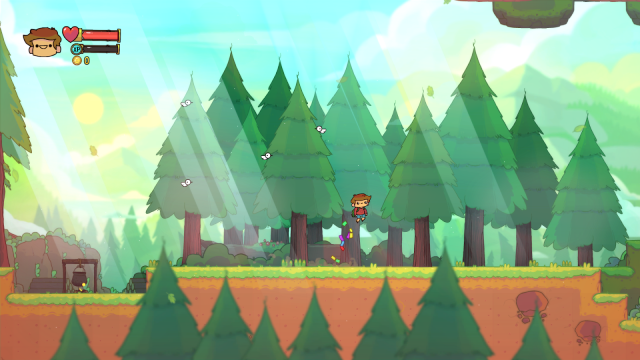 The Adventure Pals is a welcome addition to the platforming genre, holding its own due to its quirky story, colourful graphics and accessible gameplay. I fell in love with the game and didn’t want to put it down. It’s not the most essential, original, or unique that’s ever been made, and it has some technical issues, but these are minor complaints in the grand scheme of things.