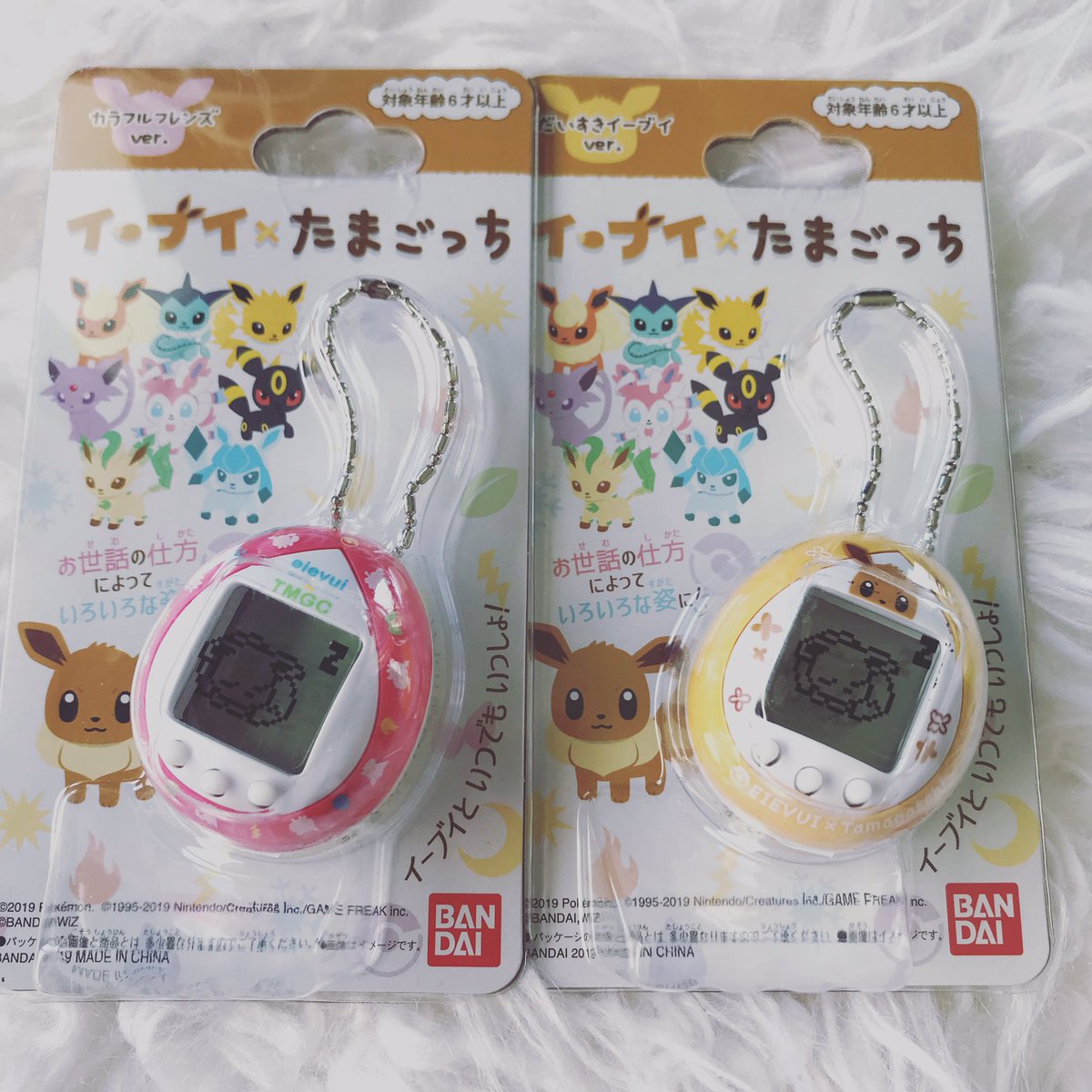 As a long time Tamagotchi fan there was something special about seeing the whole internet abuzz with excitement for an upcoming Tamagotchi release. It’s been many years since Tamagotchi were a pop culture phenomenon in Western pop culture and therefore release excitement is generally contained to the small  Tamagotchi communities.

Not so with the Eevee Tamagotchi though! Which is no doubt largely thanks to the fact that it’s a Pokémon collaboration. Nevertheless, they sold out instantly and a lot of people who have either not played Tamagotchi in years or are new to them are experiencing the joy these egg shaped virtual pets have to offer.

It was really hard to find somewhere that was still stocking them when they were released. I missed all of the preorder options as they sold out when I was sleeping. Eventually I ordered both shells from Japan You Want for more than RRP but less than reseller price. Ever since then I have been running my Eevee Tamagotchi and I do enjoy it. It’s a nano release which basically means it is quite simple compared to the larger, regular models. Which is a godsend for me as including the Eevee, I am currently running five Tamagotchi. There is really no advantage to even knowing Japanese with this release as the menus are very limited and you will quickly learn what is what even with no reading ability. I’ll show you below. 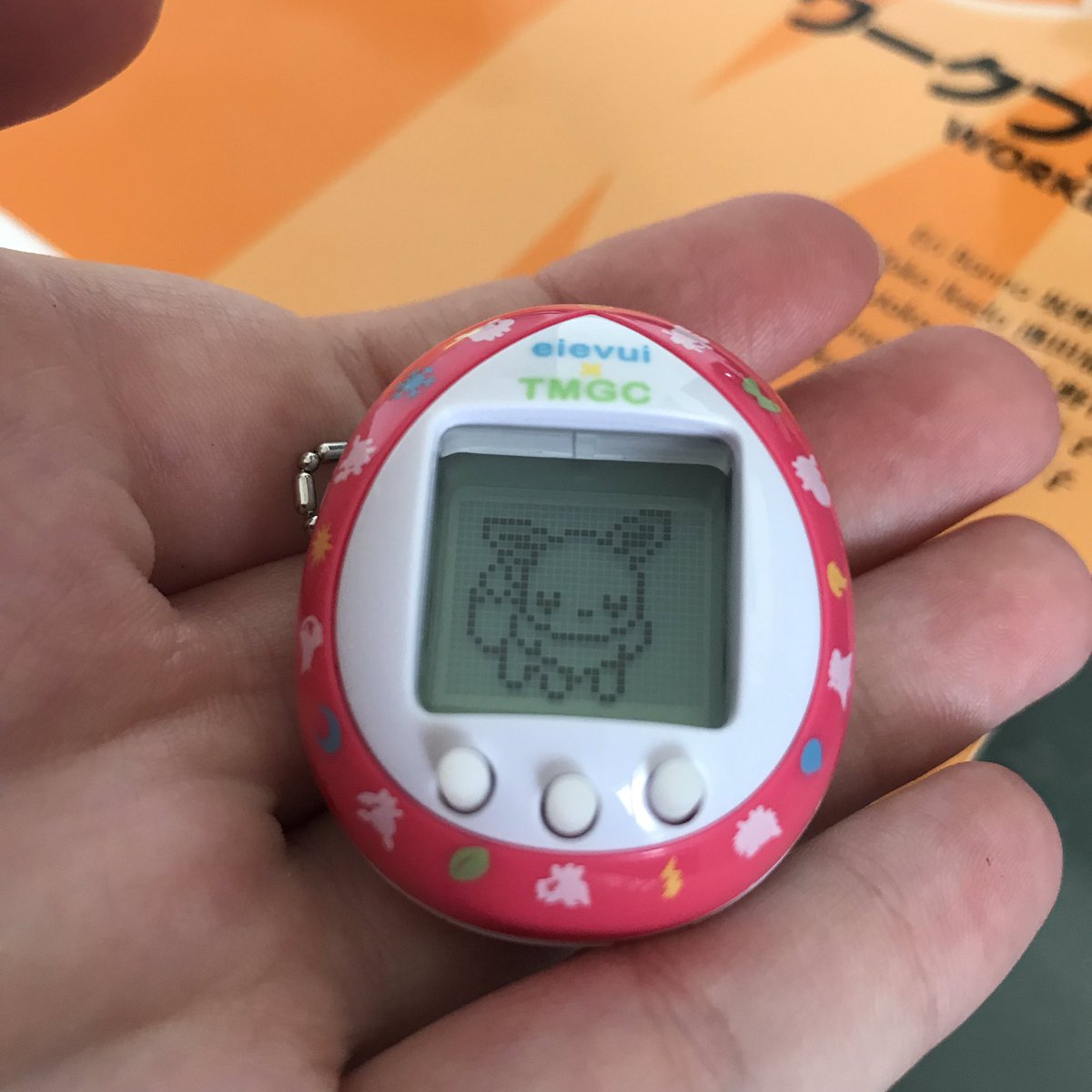 Firstly the Tamagotchi has three buttons. From left to right these are referred to as A, B and C. A brings up the menu and also lets you choose between the options. B selects which option you want and C is your cancel button.

Once you’ve turned the Tamagotchi on by pulling out the long piece of paper you will be asked to set the time. Press the A button to change to set the hour and then B to switch to minutes where you will then go set those with A again. Once you’ve set the time you will finally see the Eevee egg and after a short period of time it will hatch!

ごはん – Meal
This is the healthy meal. More or less what you should be feeding Eevee.
おやつ – Snack
Generally more of a mood booster as opposed to a meal option.

As the only stat screen that this Tamagotchi offers (found by pressing C) merely consists of Eevee looking happy, normal or sad; it’s less important to limit the amount of snacks you give it. There’s no toothaches or overweight characters in this game!

The first mini-game has you catch each berry-looking item as they fall down towards you. At the same time there’s numerous evolution stones that you have to avoid or it’s game over. You beat the game by catching give berries in a row.

The dance game is very straight forward. You will watch Eevee dance on the screen and then button prompts will appear on the screen such as A or BB. The possible input required are A, AA, B or BB. Once you see these you need to press the corrosponding buttons to match Eevee’s dance moves. Successfully complete this and you will win the game.

Playing games is the best way to increase Eevee’s happiness!

One of the small changes to the Eevee Tamagotchi is that it doesn’t poo. You will never find a random poo on the screen at all. Instead throughout the day Eevee will shed furballs and  you will have to press A to clean them up.

Eevee is awake every day from 7am to 8pm. When 8pm comes Eevee will fall asleep. Pressing A will bring up the above menu which allows you to turn the light on and off. Turn it off when Eevee is sleeping and once Eevee awakens in the morning it will automatically turn back on.

The most exciting thing about the Tamagotchi Eevee is the fact that it can evolve. You might be wondering how to evolve it into the Eeveelutions or the three exclusive evolutions. After some trial and error this is what has been discovered.

There are eleven evolutions in total: 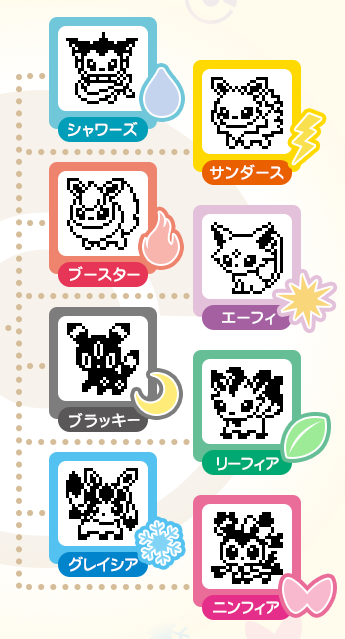 These evolutions are the easiest to get. You can find their respective evolution stones in the Berry Get game. Make sure that the last stone that you grab is the stone of the evolution that you want and when it evolves it will evolve into the correct evolution.

Technically the hardest to obtain as you need perfect care for Eevee to evolve into Sylveon. This is achieved by having Eevee constantly fed throughout the day, with snacks in between and playing the mini games with it. You do not want Eevee to cry out for attention as you will then no longer be able to get Sylveon. This also means you need to clean up furballs as they appear.

These are proving to actually be the hardest evolutions to evolve. Right now there’s no confirmed method to successfully obtaining these two. There’s rumours that you can get Umbreon if you let Eevee sleep with the light on and Espeon if you hatch it at 12pm.
I myself am yet to evolve one of either yet but when there is a concrete method I will update this guide accordingly.

For this evolution you just need to play the dance mini-game more than the other mini-game.

For this evolution don’t let Eevee sleep with the lights off. Poor Eevee.

For this evolution you need to maintain bad care with Eevee. Don’t play with Eevee and only give it one or two meals a day to keep it alive. Make sure that you do though as you don’t want to accidentally kill it and have to start all over again.

If you want to try for a different evolution the quickest way is to kill off your Eevee and try again. You do this by not feeding it, playing with it or cleaning up the furballs. It should die in less than 48 hours. Otherwise you could in theory remove the batteries and try again.