Cytus Alpha developed by Rayark; the Taiwanese development team behind the rhythm games VOEZ and Deemo was released in Europe July, 2019 by publisher Numskull Games. I was incredibly fortunate to receive a copy of the game for review purposes.

The physical copy of Cytus Alpha consists of the game itself and a special CD that includes music from Chapter Omega. It seemed to be reported that this CD was the official soundtrack – that is not true. The artwork on the box itself is absolutely lovely with the light, clinical-like colours which continue throughout the game itself. 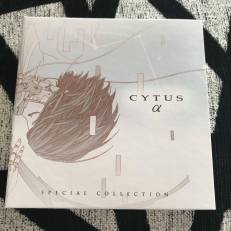 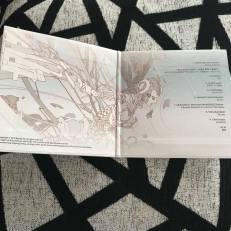 As with any rhythm game; the music is where the game shines and that is certainly the case with Cytus Alpha. The CD provided gives you a snippet of what to expect from the vast array of music in the game and it is worth listening to.

On to the game itself. Cytus is a rhythm game which had its humble beginnings on mobile. Cytus Alpha is an updated port that includes over 200 songs – both from the original game and new songs specific to the Switch release. The game includes an updated user interface, beautiful graphics and two additional chapters. There is no doubt that Cytus Alpha is the complete package.

The gameplay in Cytus Alpha is simple to understand and yet difficult to master. Once you have selected a song and start to play; you will notice a thin black bar moving up and down the screen. This is the music! When the line hits the circles that appear on the screen the button input needs to be pressed when the line is directly in the middle of the circle. Depending on how accurate the input is will depend on the receiving a ‘perfect’ all the way down to a ‘miss’. When there’s few circles on the screen this is rather easy but once the screen is loaded with them it gets challenging to choose which to tap when the line first appears or to wait for it to bounce back up. There is also the added difficulty of managing the different input commands. Certain notes will have you tap the button, hold the button or drag the shoulder button respectively. Cytus Alpha also includes a touch screen option which is well implemented. The only downside is that on occasion -at least in my experience- notes can potentially be blocked from your line of sight by your hand. Which is frustrating when you are aiming for 100%. As a counterpoint however, it is much easier to do the drag notes using the touch controls as opposed to using the shoulder buttons on the controller. It all comes down to personal preference in this regard.

The game has an easy and a hard difficulty with each individual song having their own difficulty ranking. Songs that have a difficulty rating of 1 to 2 will lull you into a false sense of security. Cytus Alpha takes itself seriously and songs at difficulty 9 are not to be taken lightly. However, the difficulty is not cheap and as you progress through the game you will find yourself improving over time. Progression through the chapters is done by obtaining five million points in each chapter. Rhythm game scores rack up fast and most of the time you will hit this amount before you have even played every song that the chapter has to offer. Still though, it goes without saying that memorization of the songs is an important element in negating the difficulty. Do not expect to perfect a song on your first or even second attempt. Practice makes perfect is definitely true for Cytus Alpha.

The music itself is an eccentric mix of J-Pop, dance and rock that all seem to have an electronic focus. When you consider the story of Cytus Alpha this makes sense. One minute you could be playing a song with traditional Japanese elements and the next song comes along and is a completely different genre. It definitely keeps you on your toes and the music is never boring!

The story takes a backseat to the game itself. As you play through the songs you will notice that you unlock excerpts from the story. You have to exit and go back to the main menu and click on a whole different option to even see the story. The story is presented in log form. Once you have unlocked an excerpt you can click on it and read it. It is generally a diary entry or report that is accompanied by a piece of artwork. It is definitely an interesting story. Humanity is on the brink of being wiped out by an unstoppable virus and they then input their memories into a humanoid robot so that they can live on and bring humanity back once the threat has ended. They are all enjoyable to read but it just felt like there could have been more to the story. The plot is engaging and yet it just felt like an after thought as it was shoved into an entirely different menu to the gameplay. There is no relevance or context and if you did not know there was story through the unlock notifications – you probably would not miss it at all. 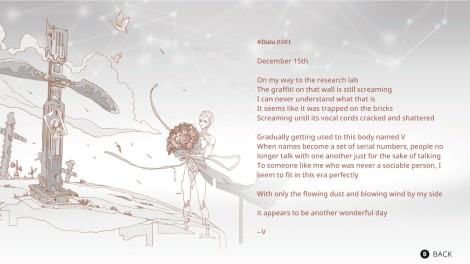 The game offers an online multiplayer option too. When you play through the story the default setting has the game look for other players to verse you. This can be turned off at any time. You can also access multiplayer from the main menu. I began to play the game not long after the European launch and I was unable to find a single match to play against. It is likely that this is due to the fact that it is a niche title, a smaller market in Europe and the fact that I am in an Australian timezone. It was rather unfortunate though as it would have been interesting to experience this element of gameplay. At the time of writing this review I am still booting up the game at random hours of the day in the hopes of joining a multiplayer match. If I am successful I will update this section to reflect my experience.

Overall, Cytus Alpha is an absolute joy to play. The gameplay is like no other rhythm game that I have encountered thus far and I found it very enjoyable. The game itself looks great and the story whilst minimal is interesting. Cytus Alpha is a game for rhythm game fans. If you enjoy heart pounding moments as you perfect difficult rhythms then this game is for you.