“The forces of a capitalist society, if left unchecked, tend to make the rich richer and the poor poorer.” (Jawaharlal Nehru, New York Times Magazine, Sept. 7, 1958)

Pikuniku, developed by Sectordub and published by Devolver Digital on both the Nintendo Switch and PC via Steam, is a puzzle-exploration game set in a vividly colourful world filled with a variety of alien-like characters which look almost reminiscent of Mr. Men characters of yesteryear. And yet, as cute as it looks, this isn’t a Mr. Men game. There is no doubt that the world of Pikuniku is the most bright and bubbly dystopian universe that I’ve ever come across in a video game.

The main character can only be described as a rather unsightly red blob with unusually long legs. The story follows this character whom I will henceforth refer to as “The Monster” as it leaves its place of slumber and begins to explore the world. The inhabitants of the picturesque world appear to be happy-go-lucky until the monster appears. It appears that the monster’s presence is in fact rather infamous, much like Bigfoot or the Lach Ness Monster, with one shop owner even selling merchandise based on the monsters imagined and overly exaggerated appearance.

It is not long until The Monster discovers Mr. Sunshine and his company, Sunshine Inc., who has tricked the inhabitants of the town into giving up their corn crops in exchange for money, which is of little use to them. As The Monster continues to explore the strange, dystopian like world, it continues to meet other creatures who have also fallen prey to Mr. Sunshine and are unable to oppose his destroying of their natural habitat and quality of life. Ultimately the game poses the question to its audience: who really is The Monster in this scenario? You’d have to say that just as Mary Shelly’s Frankenstein Monster, the real ‘monster’ in this tale is the greed and avarice of humanity.

Pikuniku allows you to play at your own pace and is able to be beaten in roughly four to five hours. There is always a clear main objective throughout the story but there is no emphasis to continue forward. Instead you are free to explore the towns, meet the townsfolk and aid them with their requests. These requests range from locating chicks that you forcibly removed from their eggs for their proud single mother through to drawing your own scary face for the town’s scarecrow; which is a fun thing to see every time you run past it into town!

There is also a substantial mini game that I can only describe as a fusion of basketball and soccer which is called Baskick. You can participate in the Baskick Championships whenever you want. It consists of a sole match against an NPC where the first to three wins. It is very simple yet still quite funny watching the characters kick each other into the air as they try to kick the ball up into the hoop. There is even a section of the game where you play a game called PikDug which is a fun little Dig Dug riff. Participating in activities such as those as well as continuing the story reward you with trophies which are Pikuniku’s collectables. There is no real in game benefit to obtaining them but the feeling of accomplishment is enough to have you scouring the world looking for treasure. 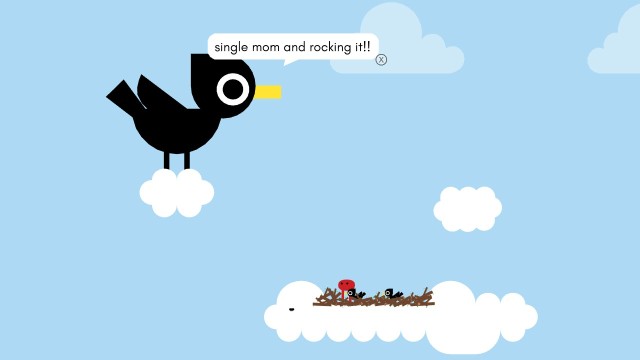 What does have an impact on the game is the hats you pick up along the way. Throughout the game you find yourself obtaining hats that allow you to perform certain actions. There is a hat in the shape of a giant pencil that allows you draw and a hat that acts as a watering can to name a few. The platforming mechanics and the puzzles are all really quite simple. In fact, the game’s an absolute breeze. It truly is one of those games where it’s not the gameplay that you’ll buy into Pikuniku for, but rather then witty dialogue and strong premise. It’s all so relevant to our world today, too. You have townsfolk who debate whether Mr. Sunshine handing out free money is good for their local economy. There is a villager who has recently discovered the pains of ordering clothing online only for it to arrive in the wrong size, a villager who is spreading awareness that not cleaning your bowl after having cheesy pasta can have disastrous consequences and even two workers who discuss a pay discrepancy between them.

I mentioned it earlier, but the graphics really are incredibly colourful. Everywhere you look there is a range of new vibrant colours staring back at you. The towns, the people and the enemies are all colourful and each area seems to have a different coloured background. This is not surprising with the game being touted as accessible to children as well as it being set in a natural yet wacky environment. The original soundtrack is composed by Calum Bowen, who also composed the music for Snipperclips. As you might expect, the music is upbeat, fun and rather catchy, with ‘Forest Town’ and ‘Take On Mr. Sunshine!’ being particularly noteworthy. There is nothing quite like the mix of tranquil music and nightclub beats that can be experienced in Pikuniku.

Pikuniku is an intriguing game as it takes some heavy concepts and transforms them into something colourfully palatable, with interesting characters and a fun soundtrack. The mix of heavy and light concepts works well in a game that allows you to choose your own pace. The fact that Pikuniku can be taken both at face value and can be dissected further makes it a wonderful game that allows people of all age groups their own unique experience.