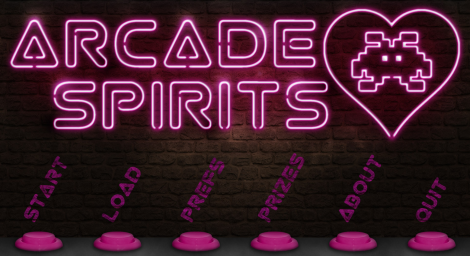 “Consider your dream under my protective umbrella. I’ll fight for your dream as well, with all my heart.” – Gavin (Arcade Spirits)

2017 saw rise to the popularity of the visual novel. From the sickeningly sweet turned homicidal Doki Doki Literature Club to the thought provoking dragon dating filled Angels With Scaly Wings; visual novels demanded a lot of my attention last year.

It was only a few days ago that I was mindlessly scrolling through Twitter when a tweet about the upcoming visual novel Arcade Spirits by Fiction Factory Games caught my eye. The name alone held my interest and I immediately had to find out more. I’ve dated dragons, pigeons and magicians but never have I had the opportunity to dive into the world of retro gaming. The script is fantastic and well-written thanks to both Stefan Gagne and Aenne Schumann; the latter who also worked on Space Cat Boyfriend which I wrote about in my fledgling blogger days. A quick search led me to the official website which sets the scene for the game.

“Arcade Spirits is a visual novel, a narrative roleplaying game in the distant retrofuture year 20XX, in which you occupy the shoes of someone dumped headfirst into the chaotic world of video game arcade management. You’ll deal with screaming kids, broken games, local gangs, foul-mouthed eSports competitors, and more. But in the process of wrangling the day-to-day craziness, the tangled relationships with your coworkers, and digging gum out of coin slots… you’ll be seeking to understand your past and present, building a future, and finding romance and love along the way.” 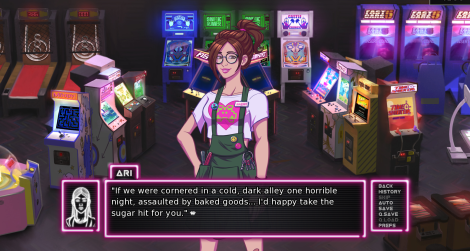 It’s been two days and I admit that I have lost myself in the colourful, funky, chip tune world filled to the brim with arcade games – both real and fictional. Whilst the game is still in development the story is already both captivating and has a strong sense of realism to it. The back story and scenarios that impact you as the main character are scenarios that a lot of the games intended audience will be able to relate to. The main characters are as diverse as they are interesting. On the topic of diversity the game lets you choose your skin tone and preferred pronoun which is something that I particularly liked and whilst it is such a small inclusion I have no doubt that it is appreciated.

My favourite thing about Arcade Spirits is no doubt the diverse range of characters whom all of them I can see myself actually associating with in my day-to-day life. Whilst they all have their own individual personalities; they’re all so human like. At first I found myself being drawn to Naomi out of the seven characters I had interacted with thus far. Her sense of style and ability to fix even the most decrepit arcade cabinet made her instantly likeable but in no time at all I found myself drawn to the cast as a whole. I have no doubt that once the full game is released I will be going through the game numerous times in the hope of romancing quite a few of them!

Have I mentioned the music? As soon as I booted up the game my eight month old daughter immediately began to dance to the music. It’s upbeat, funky and absolutely memorable. I’ve spent a lot of time listening to the music both independently and as I play the game and I am yet to find any of the music repetitive. In fact, I wouldn’t be opposed to a soundtrack releasing alongside the game. I could do with some more funky tunes in my library. 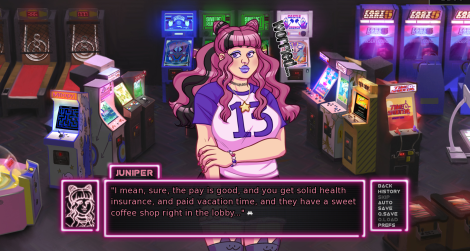 Arcade Spirits is one visual novel that shouldn’t be missed. Both fans of visual novels and arcade games in general will no doubt find a special place in their heart for this game.

You can find out more about the upcoming release by checking out the official website, following the progress on their Twitter or supporting the Patreon.