I’ve been so incredibly excited for the Virtual Console releases of Pokemon Gold and Silver. Pokemon Silver is my favourite game of all time. As a young girl I easily put over 300 hours into the game. I’d beat it, get the PokeDex, do everything I possibly could and then restart and do it all over again. When my younger brother and I would be swimming in the backyard pool I’d convince him to get out so we could play our copies of Gold and Silver together. There’s never been another game that captivated me in the same way that I was enamoured by the world of Johto.

There was only one thing that could have made my Pokemon journey better – being a girl. Even as a young child I never expected this to happen. I just accepted the status quo that I had to play as a boy. I saw it all around me; in movies, professional sport and high profile jobs there were hardly ever women in this roles. It was just life.

Then one day something happened that changed my view forever. In those long, dark days before the internet was in my pocket, I had no idea that Pokemon Crystal was released. I found out when I went over to my cousins house and he had just received a copy of the game. Being a budding Pokemon Silver fanatic I was impressed by the Suicune on the cover and immediately wanted to know what other differences were lurking beneath the surface. I knew that Gold and Silver had version exclusives and my imagination ran wild with oh so many possibilities that Pokemon Crystal could offer me. I sat down next to my cousin, lent over his shoulder and watched intently as he turned the game on for the first time.

What I saw when he began his game changed the way that I would play games forever. “Are you a boy? Or are you a girl?” Those nine words shocked me.

“You can really be a girl?” I asked shocked.

My cousin nodded before choosing the female option. I watched the female trainer choose her Pokemon, confidently beat her male rival and then start on her own adventure. I was in awe! I wanted to be just like her. When it was time to go home I begged my parents for my own copy. I told them over and over again that I could be a real Pokemon trainer now; it wasn’t just for boys. Eventually my persistence was rewarded and I got my own copy.

I’ll forever remember this moment as the turning point in my video gaming experience. Gone was the acceptance that this was “just the way it was” and I was an outsider who enjoyed the hobby but didn’t really belong. Over the next couple of years I still mostly played as a male character as it was the sole option but whenever a company added a female character I jumped at the option.

RuneScape was the first MMORPG I played and immediately I made a female character. I was excited about this but it was an enormous change from the single player experience of Pokemon Crystal. In the MMO universe just because the game lets you create a female character doesn’t mean that the other people playing will accept you for it. Reactions ranged from disbelief that I was really a female to very crude and violent insults about my appearance and sexuality. Nevertheless I persisted as I deserved to enjoy my hobby just as much as anyone else.

As I write this in 2017 times have changed a lot. In regards to Pokemon Crystal; many, many other games allow you to choose whether you want to be a male or female in the game. There are even some games that are solely played as a female. Naturally these are vastly outnumbered by the games where you are a male main character but the fact that  they continue to exist regardless of the anger that comes out of the community really makes me happy. Truth be told I feel just as immersed in a story driven game whether I am male or female. Even if the story is romantic I feel for the characters. I often wonder why this seems to be a problem for some men who say games are unplayable due to immersion issues as a female. Am I just used to it through being forced to play as a male character for the majority of my life? Or is it nothing more than blatant sexism?

In regards to RuneScape; I have moved on to Final Fantasy XIV now and originally I decided to be a male character to save any sort of harassment. After playing for an extended period of time I noticed that the player base was much more mature than that of RuneScape and I hesitantly swapped to a female character. Not once have I ever had anything said to me. It’s been lovely.

Outside of FFXIV but still online I can not say the same thing. Games have definitely become more inclusive in regards to the sex of the characters but the community of a whole is more toxic than ever. I have been bullied off forums for being female, I have been sent abuse, I have been hacked and I have received very explicit murder and rape threats. I went to a discussion about creating a app targeted to female gamers who wish to escape harassment and it was disheartening to hear their stories as they were quite similar to mine. Gaming should be an inclusive activity. If you can be a warlock, an orc or an elf why can’t you be a woman? When we try to include ourselves we are insulted and excluded, so then we try to make our own groups where we are then mocked and told doing this is the reason we are excluded in the first place. So we tentatively dip our toes back into the online experience and the cycle repeats itself. 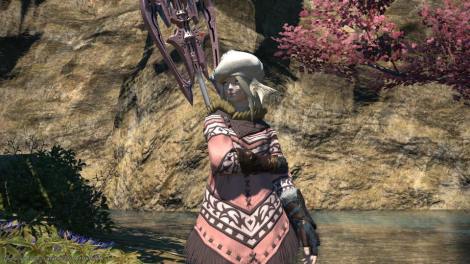 No matter what happens to me I will always enjoy gaming as a hobby. I love reading game announcements, the feeling of beating a game and most of all I love writing about them and discussing games with others. I just wish that I still held that same pure innocence when I saw the female trainer in Pokemon Crystal. That from now on females were going to be just as equal as men. To some extent that has come true but with all of the experiences I have had in this hobby I don’t think I’ll ever feel as truly accepted as my male counterparts.