I decided that 2017 was going to be the year that I became a multimedia consumer! More gaming, more reading and especially more anime. So, starting early, I decided to open up AnimeLab and see what was available to stream. I have seen SO many gifs for Himouto on the internet and it was something I have always been interested in, so when I saw it on the list I was dead set on watching it. The fact that it was only twelve episodes long also cemented the deal as after Naruto I definitely prefer shorter series or at least series that have easier entry points. It helps to have friends and family who love anime and who are open to everything also!

Himouto: Umaru-chan was a very pleasant anime to watch. I went in basically blind asides from the aforementioned humourous gifs that I had come across on the internet. I had no idea what the actual plot was or what I was about to watch, and sometimes that’s great because you don’t cast judgement or stereotype. With a lot of anime, it’s hard not to do that.

The story focuses on Umaru-chan, a fifteen-year-old school girl who on the surface appears to be perfect. She receives amazing grades, turns heads wherever she goes with an aura of grace and beauty, and suffice to say is very popular. However, once she walks through the door of her house she changes immediately into a massive ‘himouto’ – a slang term to describe putting on a different face outside of the house. Basically, she’s a giant arse weeaboo! Umaru-chan navigates her daily life switching between personas and interacting with her older brother Taihei whom most definitely enables her, even if unwillingly so.

Himouto: Umaru-chan was most enjoyable from start to finish. There wasn’t a single episode that I didn’t like or that I thought dragged on. The episodes contain multiple story segments and I feel this helped the anime progress in a way that kept it feeling upbeat and fresh. One of the things that I enjoyed the most was the use of brand names throughout the series. From the names of the games ‘Last Fantasy 15’ and ‘Monster Fantasy’ as well as food names such as ‘Pokee’ and ‘Bringles’. I really enjoy little easter eggs being included in media.

Whilst I didn’t personally feel like the side characters had much growth outside of Kirie, a loner who spends time with Umaru in her chibi persona; I really enjoyed the relationship between Umaru-chan and Taihei. I admit I found him to be a bit of a pushover when it came to his little sister and her demands, but overall he’s such a caring big brother who always has her best interests at heart. That is clearly evident through so many things that he does for her in the series, such as cooking her healthy food, trying to find a replacement Miku doll, even as far as to buying a car and many other kindhearted gestures.

I found Umaru-chans’ dual personas hilarious on a personal level as they are really easy to relate to. I find myself making sure I look nice before I leave the house and have to deal with the outside world. However those people who I cross paths with would never know that once I get home I’ll sprawl out naked on the couch and play fifteen hours of FFXIV whilst simultaneously stuffing my face with chips and Sunkist. What a life! 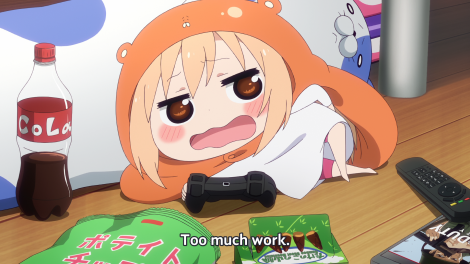 I touched on it previously but I found that I didn’t really feel any worthwhile character development from any of the side characters. I suppose as the series was short this was to be expected but I was hoping for more especially in regards to Ebina’s crush on Taihei. There were moments where it looked like he might be interested in her but it never led to anything.

I’m one of those people that generally like anime OP/ED and won’t skip them between episodes. However I found the opening to be slightly frustrating and would often skip it. Once I was half way through the series it began to grow on me but it’s not a track that I would opt to listen to again in the future.

Overall I definitely believe that Himouto! Umaru-chan is worth a watch. The humour packed into twelve episodes alone is enough to make the series a worthwhile investment of your time. After watching it I can clearly see why there are so many Umaru-chan fans out there. She’s quite entertaining. You’ll see!