Thirteen years is an incredibly long time to commit to anything. Let alone a video game. My life has changed drastically over the last decade but throughout it all RuneScape has remained a constant part of my life. Naturally over the years I have taken breaks here and there from the game for numerous reasons but I am always drawn back. It’s just such an easy game to play whilst I try to maintain some sort of study routine. It’s convenient and homely.

I admit that I’ve tried other MMO’s such as Guild Wars, WoW, Guild Wars 2 and Final Fantasy XIV and other than the latter I always find myself wanting to go back to RuneScape.

It all started when I was a twelve year old girl at my Grandmas house. I was watching one of my cousins play RuneScape Classic on the PC and I was really intrigued by the fact that he had the ability to explore such a vast area whilst interacting with other players. I went home, logged on and created my own account – which I still use to this day. My cousin hopped on too and he took me on a tour of Gielinor. From Lumbridge through to Varrock and then all of the way to Falador and Port Sarim. I really got my first taste of the world. I remember entering a bank and being spammed by a thousand “I’d like to access my bank account please.” messages. I spent most of my time killing cows for the experience and collecting the hide. If I wasn’t doing that I was killing chickens for feathers.

As a child I never read any guides on efficiency and just casually leveled up all of my skills. Mining being my favourite. I would sit at Lumbridge Swamp and mine for hours.

When they released membership it was an absolutely amazing time. I begged my parents to let me use the house phone to call up and pay for membership. Eventually they relented and I was able to walk through that gate at Falador for the first time. I was amazed. I somehow made it to White Wolf Mountain and ran for my life because of the aggressive Big Wolf that would always attack you.

I started to collect Flax below Seers and then spin it and sell it at the bank for a profit. I did this long enough to buy a Dragon Plateskirt for over three million gp from another player. Before this I had a set of Sara trimmed Rune that I loved.

I would spend hours and hours in Castle Wars. Clicking on the Saradomin portal until I was allowed in. Never once would I play for Zamorak. I would spend ten hours a day just playing Castle Wars. It’s sad that the game has disintegrated into what it is today because I hold so much nostalgia for it.

Over the years as time has become more limited due to working and going to university; I have had to become more efficient with my play time. This has caused me to become more goal driven. It is only recently that I began to care about achieving level 99 in a skill and now I have nine of them. The appeal of the challenge, the cape, being able to max, to comp. That is what keeps me going. That’s why I come back.

The aspect that I enjoy the most that a lot of other MMO’s don’t include is the freedom of choice. Changing between melee, ranged or mage is as easy as changing my gear. This is the reason that I also enjoy FFXV. I don’t want to choose what class to be stuck as right at the start. What job I want to do. I want to do all of them. So that is one of the main selling points.

There are so many varied things to do. There’s a lot of skills, bosses, quests, challenges and more. I suppose the fact that I have played for over a decade helps in this regard as I have a strong understanding of the game and never feel lost. 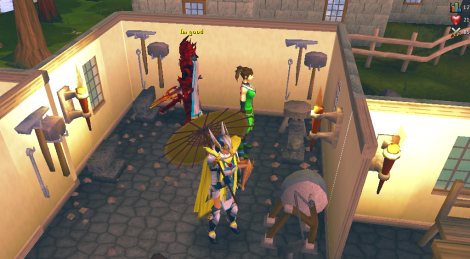 I know a lot of people have negative things to say about the community but as a whole I find all of the people I run into now to be polite and engaging. In the past I had a lot of people harass me for being a female and flaming me saying that I was either a man or insulting my appearance or sexuality. I feel like the community has aged since then and I can honestly say in the past year I haven’t had a bad experience with anyone. Quite the opposite. I have had people offer to Dung with me quite often or just want to have a chat. The clan I am in particular (Skillin Peeps) is always really friendly. So I think that helps too!

Right now my goal is maxing and I am a long way off due to only being able to play a little due to my lack of time and my limited cash stack. However, I still have hope that I can squeeze a 99 in before the end of the year. 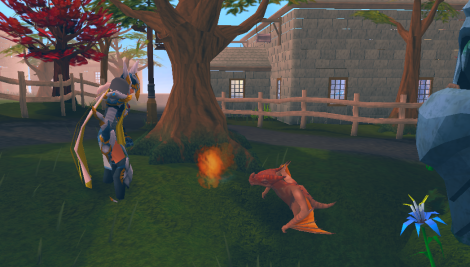 Here’s hoping that the game will be active for years to come. I can’t imagine RuneScape not being a part of my life.

5 responses to “Why I Still Come Back To RuneScape After Thirteen Years.”