I very rarely play mobile games. In fact the last mobile game I downloaded was the Final Fantasy Portal to play Triple Triad; before that Flappy Bird. I downloaded Miitomo because answering questions appeals to me. As well as the fact I can play it in short spurts in between work or study. 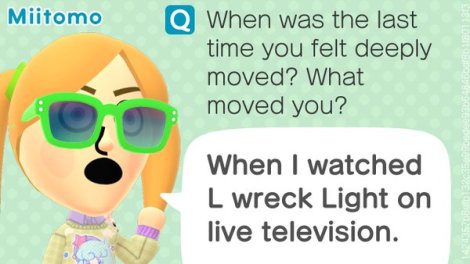 Miitomo is a mobile game released by Nintendo on March 17th in Japan and then March 31st for the rest of the world. At its core Miitomo is a social app. You have the ability to add people via social media (Facebook and Twitter) and through mutual friends/other peoples friends lists.

Once downloaded you are free to create your own Mii via a photo of yourself or the creation tool which is more or less a carbon copy of the Wii Mii creator. Following appearance you get to choose your personality and voice. Personally I think that most of the voices sound awful but it can be hilarious to hear them read certain answers allowed as surprisingly there are no filters.

The app shines when it comes to both answering questions and people responding to your answers. People are free to respond with whatever they wish as long as it is in the character limit. Pictures from Miitomo itself or off your own device are also accepted. You are notified each time someone replies or gives your answer a heart.

Fashion is the second most important aspect of Miitomo. With new clothes coming to the shop daily. On top of this Miitomo boasts a mini game called ‘Miitomo Drop’ which you can use game tickets you’ve collected or coins to have a chance to win a clothing item only avaliable in the minigame itself.

From what I have seen so far coins are collected for doing anything on the app itself. Answering questions, responding to answers, leaving a heart, daily log in bonus. Tickets are given as a log in  bonus or when you reach certain milestones.

The thing that I like most about Miitomo is the back and forth banter between friends that Miitomo allows. The fact that Miitomo is not censored in any way allows for more interesting discussion. There are many words that I never expected a Mii to say without a second thought.

The fact that people can comment on your answers is also a positive. I have enjoyed discussions on Final Fantasy XV, chicken salt, fanfic and backlogs this way. Sharing your answers is also incredibly simple. You can do this at any time in your ‘My Answers’ tab.  From there you can send them to any social media app or save it directly to your phone. Twitter has been my preference for these.

I am surprised by how much I have enjoyed Miitomo. Almost a fortnight past release and I am still logging on numerous times a day to both answer questions and  visit my friends houses to see what questions they have recently answered.

I have also enjoyed Miitomo Drop. The cat clothing and ninja clothing particularly appealed to me. I have a lot of game tickets but after they run out I wouldn’t pay for them. It’s fun because it’s free. 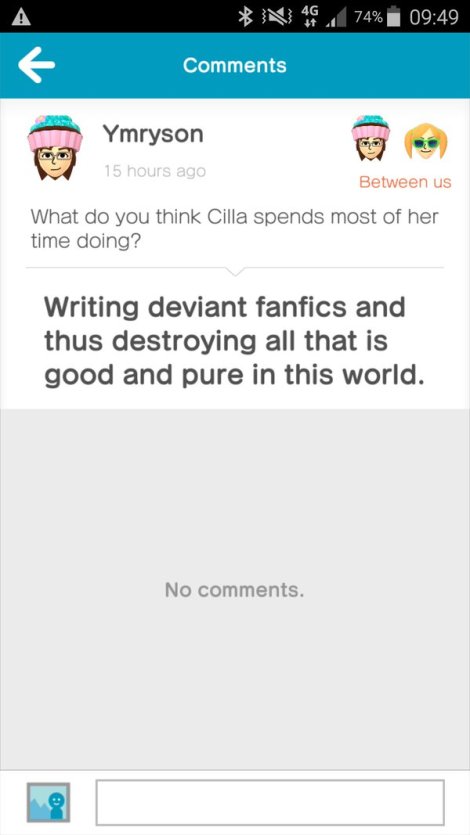 The BATTERY consumption. Oh my god. I have never seen an app drain my battery so fast and I even use the power saving feature that Miitomo provides. If I flick through some questions on Miitomo during the day, I have to desperately charge my phone when I get home. This is one app I can never leave running in the background if I want my phone to remain charged.

My other big issue with Miitomo is the inability to add friends easily. For a social app this is a really big issue. When I first installed Miitomo I had no issue adding friends from Facebook and Twitter. However, once I began to build up a list of mutual friends (who I have no desire to add) they polluted my friend suggestion list and now I see nothing else. No matter how many times I relink my social media the same mutual friends remain. Adding or blocking them results in more mutual friends. This is a very frustrating oversight on Nintendo’s part.