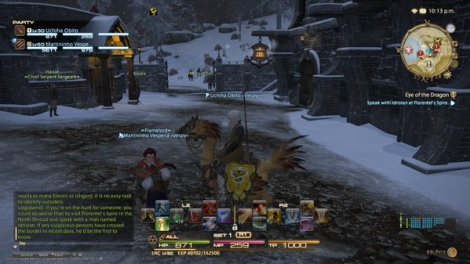 Martin and I had originally started playing Final Fantasy XIV: A Realm Reborn back in 2013. We both enjoy the Final Fantasy series and thought we would give it a go. On top of this I really enjoy MMOs for the large scale world that they provide. A large world filled with Final Fantasy lore seemed like a perfect fit.
I have spent more than eleven years playing RuneScape on and off and I had never found another MMO that I wanted to play. The benefit to RuneScape other than familiarity is that you are free to swap classes on the fly; FFXIV also has this perk. I dislike having to choose a class at the beginning of the game and having to suffer through it permanently. I also like that RuneScape offers a range of other skills to level such as fishing, cooking, firemaking, mining etc. Having a similar system in FFXIV really cemented the purchase for me.

Admittedly it took a while for me to get the hang of Final Fantasy XIV. When I finally felt confident I was immediately put off by the fact that you had to run dungeons with other people. I was worried that I would fail and the other party members would be frustrated. So I quit in 2013. It wasn’t until 2016 that we picked it up again. Martin was level 50 and I started fresh. The second time around I adjusted to the game quicker and within ten hours I was more advanced than I was on my previous character. I enjoyed playing with Martin and a few others so much that it only took a few days to clock forty hours. 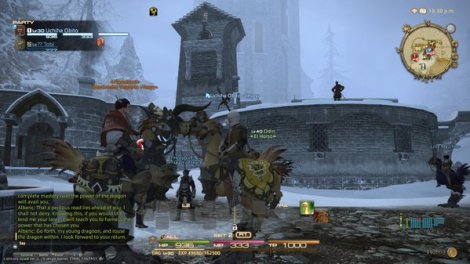 The first time I had to use the Duty Finder was nerve wracking. I still wasn’t sure what I was doing. For the first time the little clover that hung around over my head was useful as people understood I was new. I hated the clover at first and now I miss it a little bit. People understood that you were still learning. Now I have to tell people this is my first time in a duty.

Now as a level 30 Dragoon, I have participated in various duties, traversed across each land, own my own Chocobo and continued the main quest. Try as I might I can not get into the main story. MMO stories don’t hold much value to me as I just want to get to end game and play with everyone. I tend to button mash them away.

It took a few years but I realise that FFXIV is an enjoyable MMO. It is very user friendly and for the most part people are so nice. The community is much more friendly than other MMO communities I have been a part of: RuneScape and WoW. I have previously mentioned that any time I see someone with a Naruto name I talk to them and befriend them (except two who have previously eluded my grasp of friendship). Every one of them has been fine with this and some have even added me first! I had even been invited to a Ceremony of Eternal Bonding and just this morning realised I slept through it. I am so sorry friend!

Realistically I don’t know how long I can keep playing for. With work and then university next month my life will consist of working Mon-Fri and then studying at night time. I feel like I will struggle playing normal games for my blog let alone a MMO. I hope that my study load is light in first year so that I can continue to sub. I have had a lot of fun exploring Eorzea and I am not ready to leave just yet!