I have always liked cats. They just seem to have an air about themselves that I wish I could replicate in my own life. I can only imagine being mid conversation with someone, deciding that I have had enough of the topic and just sprinting out of the room. Owning two cats I have often wished that I could talk to them. We could have a heart to heart discussion on how I don’t like it when they scratch the walls of our rental or miss the litter tray. I wonder what they would say? Neptune would probably declare her undying love for me as she apologises whilst Wheatley would probably tell me to shove it. Oh, cats. 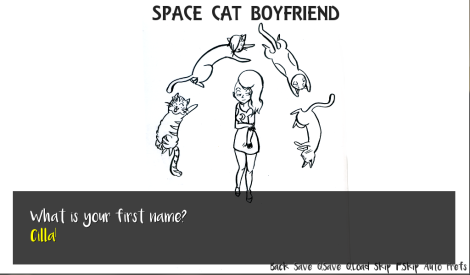 As always I chose a very unique name to play as. I want to make the most out of my space cat relations after all. IT NEEDS TO FEEL REAL. Looking at the screen I wondered which cat I would try to date. A thought that on any other day would never have crossed my mind. Cats are no worse than pigeons, right?

I decided that I would attempt to woo the spunky cat with the side swept fringe on the top left. He looks like he knows a thing or two. Maybe I get to date all four of them. I can colonise every planet in the universe with half Cilla half cat people. It would be No Man’s Sky meets Space Cat Boyfriend. What a great idea! 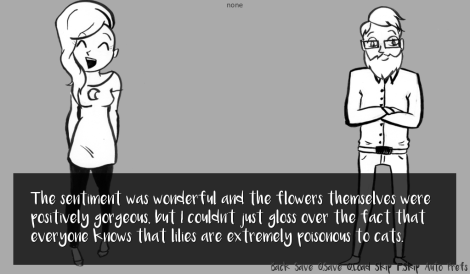 Naturally I do raise a good point! I am definitely not happy receiving poisonous flowers as a gift! Especially as I have told him many times before. Ugh! Plus his hipster beard is getting old. No wonder our relationship has been on the rocks. Plus, he’s not a cat.

Holy. This escalated so fast. One minute I was listening to emo music on my computer feeling sorry for myself and the next minute some handsome space cat has landed in my backyard. I was pretty impressed that I chose the cat that I had liked on the title screen. Some would call that fate.

Is this really a choice? I can see pictures of the moon on Google Images but there is no other way I would be able to have a conversation with my cat. I would choose this option every single time. I want to be belittled by Wheatley as he sits there mocking me!

Following on from that option I was able to talk to my cat. The Space Cats fixed their ship and then left me. Nooo! We didn’t romance.

Albeit shorter than I had initially expected I truly believe Space Cat Boyfriend has a lot of promise! The premise that all cats on earth originated from space cats is intriguing and I am interested to see where the story goes once expanded. Will we get to go to their planet.. Or will they miss me so much that they come back?

The writing was solid and I found myself thinking that I would actually say and do most of those things. It felt natural.

I actually found Space Cat Boyfriend through a friend who had shared it for his girlfriend. I believe she was the one who wrote the script. What an amazing opportunity! She did such a great job.

You can see for yourself
Here!