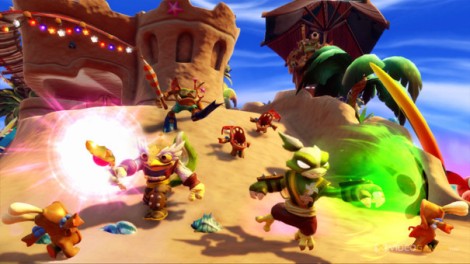 I try to stop buying Skylanders. At some point I even traded in Skylanders: Spyro’s Adventure, Skylanders: Giants and a lot of still sealed Skylanders. Too bad I got really excited by Swap Force coming out and started to buy some more figurines. Though I wish I could find the Light and Dark packs as I don’t feel like playing $200 for them. Ugh, scalpers!

You should probably play it!

As far as Skylanders go; Skylanders Swap Force is the best one that I played. It’s beautiful and such a big graphical leap on the PS4 from the previous two iterations. There’s a lot to do and I found the game fun.

I couldn’t believe how pretty the game was on PS4 when I started to play it. It was such an upgrade from Giants on PS3. I had a lot of fun with the game though in all honesty I just flew through it. I’m probably a bit too old for the story so I skipped all of the cutscenes. Mindless fun is what I would call Skylanders: Swap Force. I play it when I can’t be bothered playing something that needs some concentration.

I liked that they had a lot of different sections for all of the Skylanders. Elemental Gates, Swap Gates, Giants parts. I could see how they could be annoying if you are buying Skylanders for a young child as you keep having to buy different ones. Though for me I already had them all so it gave me access to new parts of the game. 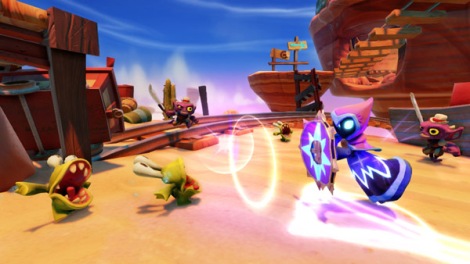 I  had one major gripe with Skylanders Swap Force and that was ActiVision and their lack of care for the Australian market. The Australian disc has an issue where the latest patch won’t install. It downloads and then nothing. When you ask ActiVision they give you the usual spiel.. Restart your console, check your internet settings. We are working on it. You said that two years ago! Talking to them was so frustrating. They said their was no problem. One of the trophies for the game is online so without the update it was unobtainable. I ended up buying a UK disc and the update installed straight away. Still such an annoyance that I had to buy a second copy.

I also don’t like that some of the Skylanders that I actually want are really hard to get. In Australia at least the Light and Dark packs came out of nowhere and are now incredibly hard to get unless you want to pay through the roof. I have seen them for around $200. Hopefully one day I will stumble upon them for a reasonable price.

Have Some Eye Candy